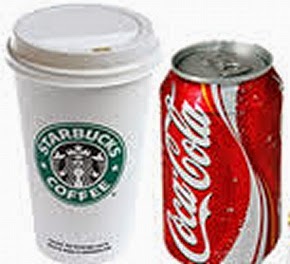 Hi all, I have caught a lot of flak over the years for my serious coffee addiction. I am embarrassed to tell you how much coffee I drink, so, I won't.

I have noticed over the past five or so years that soda is quickly becoming the beverage of choice for truckers. I know neither drink is good for our bodies but really which one is worse?

Just off the top of my head I would have to say soda is.

Because soda contains sugar as well as caffeine. Sugar is a drug much like heroin and contains a good deal more calories than coffee, empty calories that contain no nutritional value. An 8 ounces serving of soda pop averages about 120 calories, 8 ounces of coffee averages 1 calorie, big difference. It's no wonder I know people who say all they had to do was quit soda pop to loose 25 pounds.

In an article on WebMD sugar, "...not only makes us fat, it also wreaks havoc on our liver, mucks up our metabolism, impairs brain function, and may leave us susceptible to heart disease, diabetes, even cancer."

A lot of drivers have told me that they switched to soda because it seems to work better at waking them up, this doesn't surprise me, even when considering the fact that soda contains less caffeine than coffee, an average of 95 to 200 milligrams for 8 ounces of coffee, and 23 to 50 milligrams for a 12 ounce soda. What makes the difference is the sugar, it's all those calories being dumped into your system.

Caffeine of course is also a drug, it affects our nervous system and gives a feeling of wakefulness, it increases our heart rate and blood pressure and may even cause the heart to beat irregularly and can interfere with a good nights sleep. It is also a diuretic which explains why you have to pea more. It also has the added effect of becoming tolerated in your system meaning that you must drink more to get the same effect and it is addictive just like sugar. The FDA had put together an informative brochure on caffeine, you can get it at:
http://www.fda.gov/downloads/UCM200805.pdf.

So bottom line here. Neither drug is good for you. Soda Pop will put pounds on and coffee will mess with your nervous system. Both are addictive. Best choice, drink water.

What will I do? What do all addicts do...

Keep the rubber side down. Till next time. 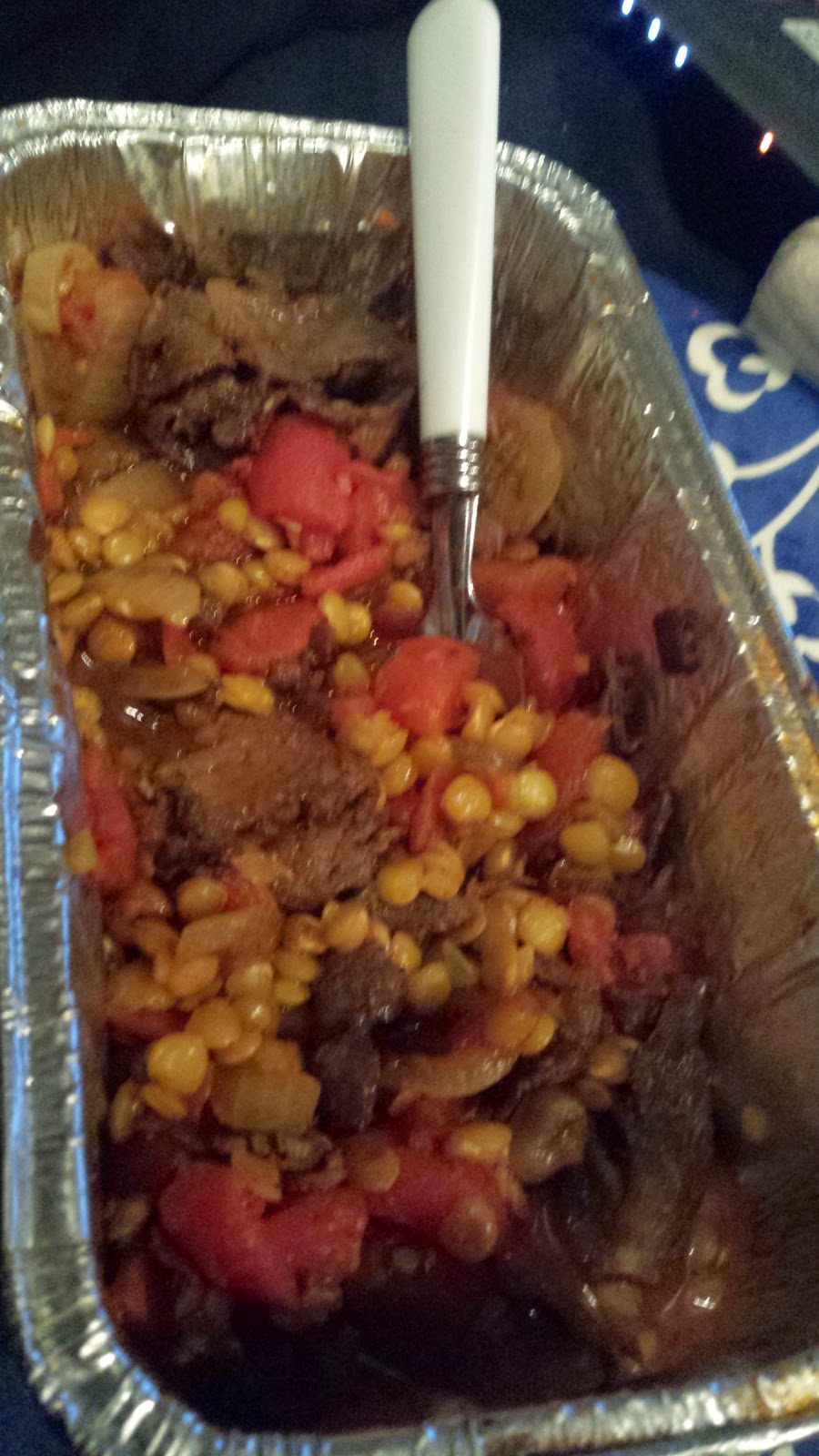 I do love my  Road Pro Portable Oven.

The Picture shows a lentil chili I made for dinner. Half a cup of dry lentils, half a package of chili seasoning, half an onion, a can of diced tomatoes and about 4 ounces of shredded roast beef plus about half a cup of water. I put all of that in the bread tray the put it into the oven, plugged it in, and headed down the road. About an hour later I had to pull over and eat it cause the smell was making me hungry!

I don't get paid for endorsements like this one and if you would like to encourage me to keep writing then buy my book, "So, You Want To Be A Truck Driver". or my other one "Ten Commandments a Guide to Holiness".
At the very least like my Face Book Author page, please.

The company I currently work for doesn't allow inverters installed since they think their little 1500 watt inverter will run a microwave and the environmental air, so the portable oven has been a Godsend for me. 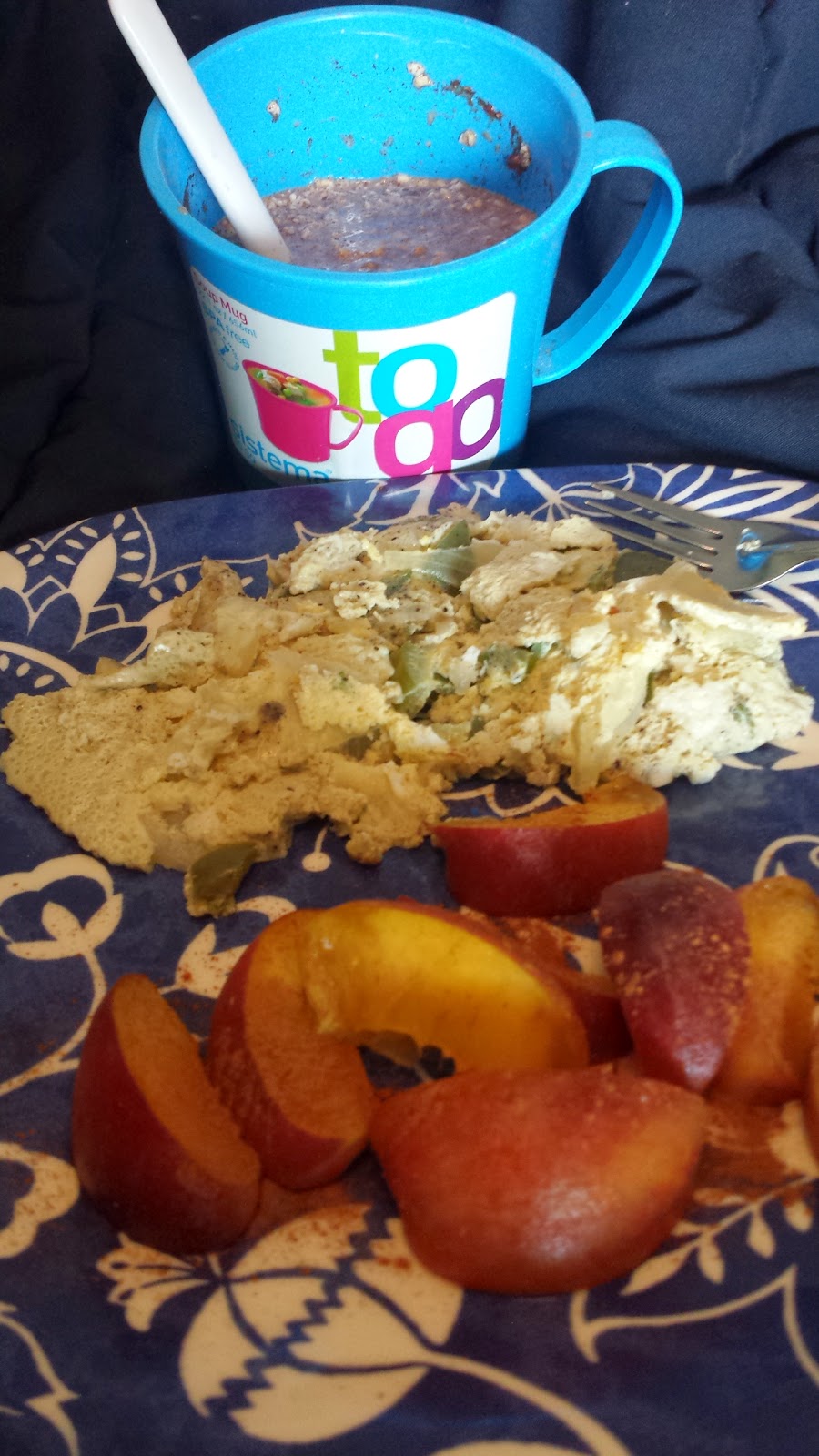 Pictured on the right is my average breakfast (when I don't oversleep). It is made of 3/4 cup rolled oats with about a cup of almond milk made overnight by adding the liquid and letting it sit. I did make my eggs in the portable oven by lining the bread pan with foil then adding two eggs whipped with about a quarter cup of water, poured onto onion and bell pepper, plugged it in for about 20 minuets and presto, scrambled eggs. I did find that adding about half a cup of water into the oven under the bread pan does speed up the cooking of any item, but be careful when you open it that you don't get a steam burn.

I have cooked potatoes by wrapping them like I would for a conventional oven and putting them directly into the portable oven. I have had better results by adding water to the bottom half of the oven and then putting in the bread pan and the potatoes in the pan. It take about an hour to hour and a half and the way I deal with the time issue is to put them in at one of my stops then plug the oven in about and hour or so before I stop for that meal.

I have steamed broccoli in the same way I cook potatoes, takes about 20 to 30 minuets.

I like hot meals and with this cool little item I get to eat fresh and hot while on the go.

Keep the rubber side down.